The balance of trade in non-military domestic manufacturing may have gone to hell upon sale to China but there's one place were the US still rules supreme. We're the biggest sellers of arms, bar none, with special emphasis on sales to countries ruled by our toadies.

That's the indelible message in this graph, from the New York Times: 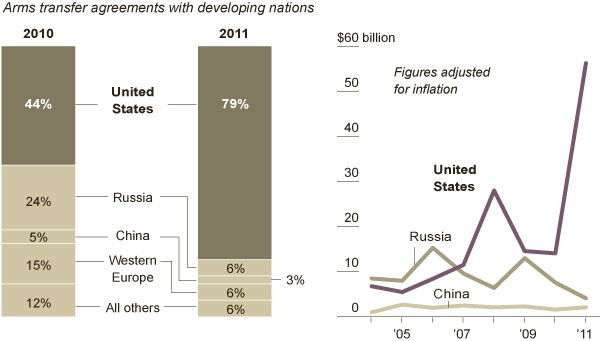 One can think of US arms manufacturing as a protected Keynsian jobs program. No other sector of the American economy enjoys such status. It is a near perfect example of industrial socialism in which the taxpayers assume all the investment and initial risk but are returned little to none of the profit made on it.

DD blog covered this phenomenon in the Economic Treason series last year, at Globalsecurity.Org and here.

At the time, I made the argument that every American was entitled to a royalty on arms sales since it is taxpayer money that pays for the innovation, development and primary manufacturing of the American weapons coveted by the various tin pot oil-producing countries on the southern side of the Persian Gulf.

And the royalty was calculated this way:

Again, it's not unreasonable to make the argument that the stressed in the middle class ought to receive something back for the country's primary business product/export, one its taxes bankroll and grow. A 20 percent war dividend for 2011 might look like this:

Noting the astonishing increase in the slope of the line in the NYT graph, one can judge the amount in the theoretical royalty check has increased substantially..

The CRS report examining US arms sales was obtained by Steve Aftergood at Secrecy blog. And it is here in a post bearing the title: US Arms Transfer Agreements Reach Record High.

To alter a current and much overused trope from the presidential war: The Lockheed Martins and General Dynamixes didn't make that, We made that.

If you don't laugh you'll surely have to cry.

Originally published at Dick Destiny blog. About the author.